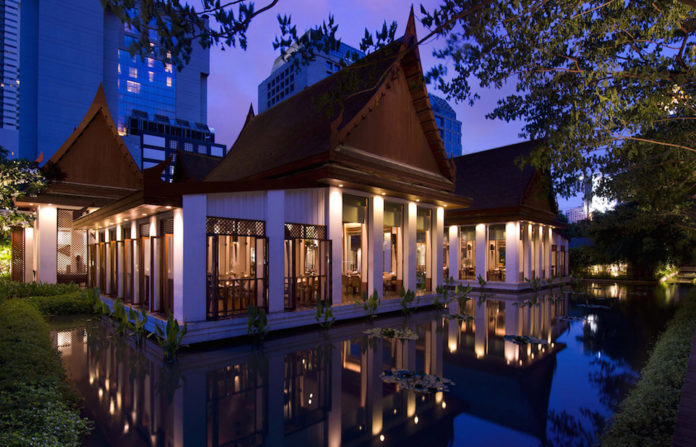 Under the inspirational leadership of King Ramkhamhaeng, the Sukhothai empire of the 13th century was the first seriously successful attempt to unify the Thai lands.

The art and architecture of this Buddhist kingdom are distinguished by the lotus-bud cheri, a religious tower capped with a tapered final, and sublimey graceful images of the walking and seated Buddha. Modern versions of these ancient artefacts are scattered throughout the hotel and its extensive gardens, while a whole row of red-brick chedis set in a lotus pound form a dazzling ensemble in the hotel’s main internal courtyard. The guest rooms, meanwhile, evoke the glories of the country’s medieval past in more subtle ways, with their refined use of teak floors and Thai silk wall hangings.

The Sukhothai likes to think of itself as a sanctuary in the hustle and bustle of one of Asia’s most crowded cities, an oasis of tranquility to still the beating heart of the overwrought traveller. Situated in the embassy district of south Lumphini Park, it is indeed a haven from which to sally forth into the frenetic commercialism of downtown Thanon Silom. While you won’t want to miss out on the attractions of this fascinating city, facilities like the Sukhothai’s award-winning Thai restaurant, set on an island in a lotus pond, and the garden spa, which harnesses the natural benefits of its green surroundings, will surely keep luring you back.

Owning property in the Philippines