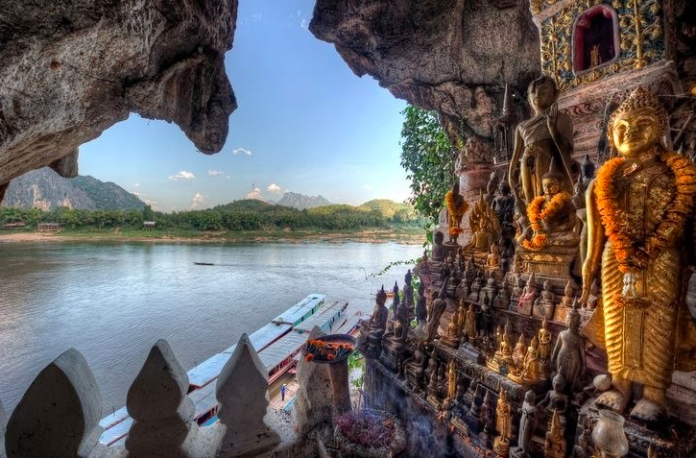 Often overlooked in favor of its better-known neighbors, paralyzed by wars and long isolated from the rest of the world, landlocked Laos the Land of a Million Elephants remains one of Southeast asia’s most pristine environments, a beguiling destination of untouched culture and home to some of the friendliest, most laidback people on earth.

However, escalating buzz driven by media must visit lists and tourists seeking the next hot destination has thrust the country into the limelight, with Luang Prabang in the north and the Four Thousand Islands down south proving increasingly popular among backpacker crowds. Nevertheless, there are still plenty of as-yet unbeaten tracks that retain charming mystique.

The hilly landscape is sweeping and lush, the Mekong River so wide and mighty it almost looks like the sea. The cities are more like small, bustling towns. They are walkable and friendly, quiet and early-to-bed – never overwhelming. Southern and central Laos have a remote feel, as if time was stopped fifty years ago and residents are less than interested in catching up.

Crossing the border at the north-east corner of Thailand in ubon Ratchathani and getting a visa (uSD36) proves quick. It’s then a one-hour dusty car journey on a sandy, sun-beaten road – the first of many during our ten days in the country – which leads us to Pakse, the capital city of Champasak province in southern Laos.

Founded by the French in 1905 as an administrative outpost – the European country installed its rule over Laos at the end of the nineteenth century, claiming it as one of its colonies in then- Indochina until 1953 – it’s hard to believe this is Laos’ fourth largest city: its pace is slow, its infrastructure just beginning to expand, its appearance that of a placid suburban center.

The vast Talat Dao Heung (New Market), one of the biggest markets in the country, is the main draw, offering a dizzying selection of fresh produce, coffee, towers of baguettes – a staple among Laotians – and household products. Among the array of livestock and piles of rice, it’s the sheer amount of fruit in all of its variety that immediately catches our eye. Vendors sell a cornucopia of plump, juicy mangoes, tangy, chewy rambutan and earthy longan, whose name means ‘dragon’s eye.

After haggling with a songthaew driver, who pilots one of the tired-looking 70s pickup truck-cum-buses that are ubiquitous across the country, we soon leave the city behind for Ban Shapai, a nearby village of just a few dozen, renowned for its silk weaving.

Meandering along the azure Mekong, through a neighborhood of wooden houses perched pre-cariously on stilts, we find we’re the only travelers around. A man cooking buffalo skin in banana leaves invites us to join what looks like preparations for a party.

grandmother, balancing two toddlers in her wrinkled arms, first shows us her threads and textiles, then offers to take us to the main and only temple of the village. There, a smiling monk eagerly introduces each brightly-colored image on the wall, using a plethora of creative sounds and hand motions in place of English.

we’re amazed time and time again by how incredibly nice everyone is. The Laotians truly are one of the highlights of our travels. Smiling and helpful, they have a relaxed demeanor no doubt influenced by Buddhism, the nation’s main religion, but even more so by a strong faith in the concept of karma, which guides most daily duties.

“Saibaidee” – hello – is a recurring word we hear everywhere we walk or cycle, a warm greeting from children and elderly, farmers and students. There’s an infectiously positive, open attitude towards strangers, one that makes you feel instantly at home.

After a dinner of laap – Laos’ national dish, a minced meat salad flavored with lime, garlic, fish sauce, mint leaves, spring onion and ground toasted rice – alongside sticky rice and papaya salad, washed down with copious amount of Beerlao, we head to bed. The next morning we set out early for Champasak, a sleepy riverside town (village, by our standards) some 40 kilometers south of Pakse.

A modest, near-deserted place, this former royal hub is unlike anywhere we’ve visited: the one narrow main road seems to be populated only by bicycles, geese and buffaloes. An older way of life persists throughout its few French colonialera buildings, punctuated by small, family-owned restaurants and hammock-strewn cafes. we’re here only two days, but could stay much longer.

The Angkor-period ruins of wat Phu Champasak, which lies ten kilometers southwest of town, are the main historical attraction. Granted uNESCO world Heritage status in 2001, this is the most important Khmer site in Laos, a heavily weathered series of crumbling temples and shrines dating back to between the 6th and 12th century.

Perched on a forested hilltop, decidedly well-worn and much smaller in size than other Southeast Asian wats, what this landmark lacks in grandeur it makes up for in atmosphere. Awash in luminous frangipani blooms, Lao’s national flower, its crumbling architecture commands a near-magical presence against a pristine backdrop of the greenest greens and bluest blues. when one arrives early in the morning, only one or two other travelers in sight, the ruins whisper of a sacred past, of ceremonies and sacred offerings.

A bike ride back to town and a short trip across the Mekong on a make-shift catamaran ‘ferry’ brings us to another part of the UNESCO world Heritage site that also encompasses watPhu: the island of Don Daeng.

Lying in the middle of the Mekong like an old crocodile bathing in the sun, this stretch of land eschews the tourist crowds that gather farther south on the increasingly popular Four Thousand Islands. Rural life on Don Daeng continues on exactly as it did a hundred years ago. There’s not a transportation vehicle to be found except for a few motorized tractors. Locals live in wooden Laotian houses on stilts, raising chickens and water buffaloes, gathering hay and planting rice.

As we pass a creaky house full of people, a young man pops out and invites us to join the local party for someone’s engagement. Refusing wouldn’t be considered acceptable behavior, so we readily comply. As youngsters play Laotian pop songs, a feast is laid before our eyes. There’s Beerlao by the bucket plus laolao (rice whiskey) and delectable eats like namkao – crispy rice salad mixed with pork sausage and rolled into tiny, moreish balls and thin slices of dried beef covered in spices called siin saw an. It’s a full on feast for the senses and an authentic glimpse into local life.

upon returning to Champasak, belly full and sunburnt, a visit to Champasak Spa for a traditional body massage seems like the perfect way to end the day. Run by a French woman who moved here five years ago, the wellness center has become an attraction in its own right, boasting top-notch services, idyllic views of the Mekong and a soothing atmosphere that permeates this quaint complex. It also acts as support for the local community, creating jobs to allow women to stay in Champasak rather than migrate to bigger cities.

Leaving Champasak behind, we have a quick stopover in the unremarkable Savannakhet in western Laos – the second- largest city in the country, yet still very much a small riverside hub – and arrive at the caves
of Tham Kong Lo in central Khammouane Province. Mostly known for its towering lime- stone peaks, the area is dense with caves, lagoons and forests.

Getting here is an exciting journey. Laos has no railway network, and its road system lies in a deteriorated state. Of the 21,716 kilometers of highway, less than 10,000 are paved. Most transfers across the country are done overland by buses or crammed songthaews. Calling this hazardous traveling would be an understatement.

Breakdowns are recurring aspects of pretty much any drive, but it is the lurching of these tattered buses through holes that feel deep as canyons which ring the most alarm bells. There are also, of course, the countless times when our hurtling vehicle narrowly avoids head-on collisions with cows, which inevitably lurk in the blind spot of a sharp bend.

Carved into the karst limestone rock of PhuHin Bun National Park, Tham Kong Lo is one of Southeast Asia’s geological wonders. Otherworldly stalactites, spooky limestone formations and ceilings more than 300
feet tall are found throughout the seven-kilometer-long cave, which, flooded by a subterranean river, is only accessible by skinny wooden boats and immersed, for the most part, in complete darkness.

Torches will be your best friend – they are provided by the ticket center – and so will anti-slip shoes, essential when your boat-man asks you to get out and help him push the vessel where water is shallow. A ride through these cavernous tunnels is electrifying and eerie, made even more adventurous by the pre- cariously balanced ships.

After the day-long excursion, the night is spent at the village of Ban Na Hin with a local family that, like many others in the area, has branched into hospitality and now runs a low-key, unpretentious guesthouse. If the village doesn’t offer much in terms of sights and attractions, it is once again the kindness of the people we meet that leaves us with a deep impression.

At dawn, after a breakfast of strong Laotian coffee and a freshly baked baguette, we set out for what will turn out to be the touristy part of our trip – Vientiane and Luang Prabang. Here backpackers descend from surrounding mountains or step ashore off slow boats, clutching tattered Lonely Planet guides. we will no longer be the only travelers around – a new ex-perience after the unspoilt surroundings we found down south. As we walk though the busy streets, it’s Champasak we’ll continue longing for.

The Chedi Club at Tanah Gajah, Bali – Will quickly come to feel like...