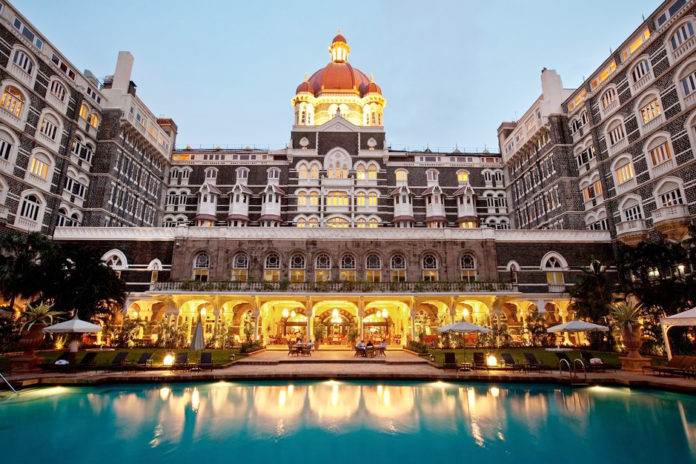 This dome-topped Mumbai landmark was finished in 1903 and stands commandingly on the sea front overlooking the Gateway of India, that monumental arch built to commemorate the visit of King George V and Queen Mary in 1911.

The Taj instantly became a favourite with travelling Maharajas, who felt the sumptuous interiors and extraordinary level of hospitality were well up to their demanding standards. Those standards have been maintained, more recently attracting countless celebrities and discerning guests who will settle for nothing less than one of India’s (and the world’s) finest hotels.

As that accolade would suggest, the 560 elegant rooms (including 44 suites) are superbly decorated and equipped, representing the happiest of marriages between old-world style and state-of-the-art facilities. The Palace’s incredible interiors feature a treasure trove of historical furnishings and memorabilia and the grand staircase has to be seen to be believed. Welcoming staff members look after each guest personally and are happy to arrange meals, spa treatments, city outings, shopping trips, tours and just about anything legal Mumbai has to offer.

The food is as good as everything else, with a choice of restaurants and culinary bounty that ranges from the subcontinent’s finest to international cuisine from the likes of France, Italy and Japan. The Palace also has excellent health and fitness facilities, including an outdoor pool and steam room. The Jiva Spa is a testament to the efficacy of traditional Indian ayurveda combined with modern techniques, ensuring that guests who are into pampering can be freshened and fortified. A hotel this good would be way beyond the reach of mere mortals almost anywhere else on the planet, but here it can be for you.

The Oriental Hotel in Bangkok represents the true grandeur of Thai hospitality.

The ultimate responsibility of due diligence when investing in Asia property